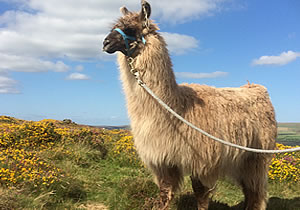 The week before Easter is alway a bit hectic around here, we are usually rushing around getting everything ready for the fore-coming Holiday season.  This week we had the last three windows in our Holiday cottages replaced and what a difference, the new ones have a large pane of glass giving uninterrupted views over the garden.  Steve just needs to replace the voile curtains in the bedrooms and thats all finished.

The Llamas are still in the winter paddocks eating us out of hay as there is very little grass left in there.  They will be returning to their Summer pasture at the bringing of April.  This will make things a lot easier for us as we can catch them up  and pen them easily and they will have loads of Grass to eat as that field is 7 acres although it will be split soon to allow half to grow hay.  The two Woolly Llamas, Leo and Mr McGee are going to have a trim as soon as the weather is warm enough.  Their fleeces are so long now it is difficult to get a pack on them so we will probably give them a barrel cut, I like to see the long fleece on the front apron especially Mr McGee as he almost has ringlets.

We have lots of Llama Walks booked in for the next few weeks so it will be really good to get the boys working again.

Our little Alpaca herd had some excitement this week, we only have 6 females left at the moment and we had hoped that 4 of them were pregnant.  So on Thursday we haltered up Rio and took him down the lane to see the females to see who spat off.  Starting with Hebe who I didn’t think was pregnant and I was proved right on that one, bit of a disappointment as she produced a cracker this year.  Zanti was another I wasn’t sure about but she proved to be pregnant, really excited about this one, it will be her first.  Iona and Lalique are also confirmed pregnant so 3 out of 4 isn’t two bad and Hebe can be bred early this year, just need to decide who to put her too.

It is at this point I almost start wishing the year away as Cria time is the best time, they are just so much fun to watch. 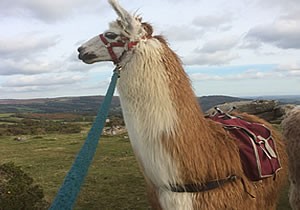